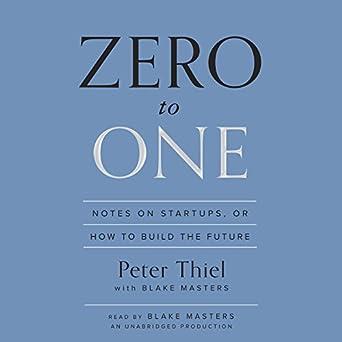 How to Build the Future

Every moment in business happens only once.

The next Bill Gates will not build an operating system. The next Larry Page or Sergey Brin won’t make a search engine. And the next Mark Zuckerberg won’t create a social network. If you are copying these guys, you aren’t learning from them.

It’s easier to copy a model than to make something new: doing what we already know how to do takes the world from 1 to n, adding more of something familiar. But every time we create something new, we go from 0 to 1. The act of creation is singular, as is the moment of creation, and the result is something fresh and strange.

Progress comes from monopoly, not competition.

If you do what has never been done and you can do it better than anybody else, you have a monopoly – and every business is successful exactly insofar as it is a monopoly. But the more you compete, the more you become similar to everyone else. From the tournament of formal schooling to the corporate obsession with outdoing rivals, competition destroys profits for individuals, companies, and society as a whole.

Zero to One is about how to build companies that create new things. It draws on everything Peter Thiel has learned directly as a co-founder of PayPal and Palantir and then an investor in hundreds of startups, including Facebook and SpaceX. The single most powerful pattern Thiel has noticed is that successful people find value in unexpected places, and they do this by thinking about business from first principles instead of formulas. Ask not, what would Mark do? Ask: What valuable company is nobody building?

This site uses Akismet to reduce spam. Learn how your comment data is processed.